Nice to meet you in XR! – Ergochares

We would like to introduce you to the characters that animate the XR experience developed by BRIDGES at the Foundation of the Hellenic World. These are Avatars and Non-Player Characters (NPCs).

The XR experience created by BRIDGES at the Foundation of Hellenic World  is set up in the city of Athens in 415 B.C, at the beginning of the month of Thargilion, that is of June, and the city is in turmoil.

After the stormy meetings in the Assembly of the people, the Athenians decided to send numerous expeditionary forces to Sicily in order to conquer the city of Syracuse. They believe that this is the way they can obtain a base of operations against the Hellenic cities of Southern Italy.

In the house workshop of Ergochares, the famous potter, a small farewell party for his son, Eftymachοs, has been prepared, because, in a few days, he is joining the Athenian military fleet.

Apolloniοs, Ergochares’ dear friend, and his family are invited. The sophist Hippias, teacher in rhetoric, philosophy, and mathematics, is also a guest.

Imagine teaching history using avatars and NPCs. We would have the most passionate students of history ever.

Let’s start by introducing the NPC: father, mother and son who live in a traditional house of the 5th century B.C.

Ergochares (NPC), a craftsman, son of the Pericles’ spirit 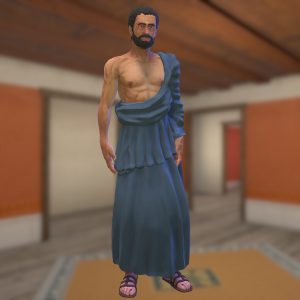 Hello, I’m 45 years old and I’m from one of the oldest families of Agoraios Kolonos, an ideal blend of the old class of citizens of Solon’s period and the newly established Democracy of Pericles. On the eve of the Peloponnesian War, I dared to invest the small capital I inherited during the prosperity of Athens, in a pottery workshop. Despite the unfavorable circumstances, the financial prosperity and the intense commercial activity – due to the import of goods from Piraeus – caused a great demand for ceramic utensils.

My workshop flourished and brought great wealth to me and my family. Today the  most experienced craftsmen work for me, and I can accomplish any kind of order. I now belong to the income class of the triakosiomedimnoi, the second wealthiest class in the timocratic system of Athens.

I’m a very important person in my municipality and belong to the generation that kept Athens alive in the first phase of the great war against Sparta.

My body is fit and I have a hard look of a craftsman, resulting from the many hours at the workshop, but also thanks to my military service in Amphipolis of Macedonia and the invasions of the Athenian navy in the Peloponnese.

A cloak in a deep blue color highlights my suntanned skin. My angular face is covered by a well-groomed beard, supported by a careful conservative haircut. My shiny black hair and beard, which show the first touches of adulthood, having some silver hair, give an intense highlight to my clothes.

We use cookies to ensure that we give you the best experience on our website. If you continue to use this site we will assume that you are happy with it.AcceptRead more